I’ve always had a sense of how not normal I am, and it brings with it a sense of aloneness. I am not socially stunted. I’m incredibly adept, in fact. But that doesn’t change the fact of this aloneness which clings to me.

The writing backwards was of course a very obvious thing. A marker of strangeness which was undeniable in itself. Something to hide, and yet a powerful secret.

I was seven when I learned I wasn’t alone. The discovery that Leonardo DaVinci wrote like me flooded me with relief. At least at first.

The big daVinci exhibit came through about then and I remember standing in the crowd staring at the Vitruvian Man, wishing I could read Italian.

If I had known Italian I probably would have been the only person there who could read his mirror-script perfectly. It still took far more effort to read left ⇒ right than right ⇐ left at that age; before school could fully sink its teeth into me.

And for a little while I held onto my weird bond with the dead artist. But – (shockingly) – it turns out leaning on Leonardo DaVinci for reassurance of how totally and completely not-weird I was, was a terrifically bad strategy. And before long the instinctive childlike kinship I initially felt with Leonardo was a source of confusion and something almost approaching self-scolding in and of itself.

Because only DaVinci is DaVinci.

And so I was back at square one. But maybe not entirely. Maybe Leonardo did help, in his way. By lowering – or at least shifting – the value of normalcy.

I only know that at some point I embraced the writing. At some point I loved the two sets of notebooks. And the secret only I knew.

(I didn’t know my mother had figured it out even before I wrote my first word in a “decoy” journal, thinking that would definitely keep her from figuring it out. Because, duh.)

*Much, much later, when I read my first biography of him and especially his own words, just after my parents abandoned me – perhaps death is a decent excuse for them, but it was wholly unhelpful to me – Leonardo’s notebooks filled me with astonishment after astonishment.

I had to put the big collection of his notebooks down several times while I sat gasping for air. It felt like me writing to myself. My own thoughts, often using my own words, or so close so as not to matter. It’s the only time I’ve ever felt that. There’s people I relate to, but this was different.

I’ve never admitted that to anyone, for obvious reasons, but I am right now intent to examine myself and to be honest and unmerciful about what I find. I’ve spent many years stating that I had nothing to lose on that front.

I was so wrong.

My reputation has become all that matters to me and have now lived a good many years knowing that my character is, and has always been, the only thing in question. And it still is.

And therein lies the rub. Because the truth is a threat. And I haven’t fared well against allied, raw power in the past, to put it mildly.

But I have an idea. Finally. And it’s growing on me. 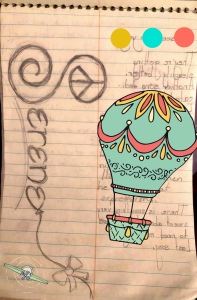