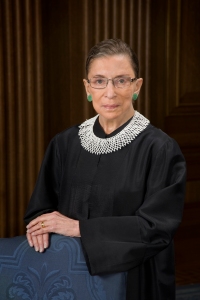 Facts of the case

Sharron Frontiero, a lieutenant in the United States Air Force, sought a dependent’s allowance for her husband. Federal law provided that the wives of members of the military automatically became dependents; husbands of female members of the military, however, were not accepted as dependents unless they were dependent on their wives for over one-half of their support. Frontiero’s request for dependent status for her husband was turned down.

This case was a turning point in sex discrimination cases and the first case (of many) to argued in front of the U.S. Supreme Court by an amazingly convincing young female attorney, Ruth Bader Ginsburg (as amicus curiae for American Civil Liberties Union, by special leave of Court.) She does not disappoint.

on 14 May 1973 the court decided 8-1 in favor of appellants in what would be a stark turning point in sexual equality/discrimination cases; a cause that now Ruth Bader Ginsburg would take up again and again; and win again and again.

It is interesting to look back at how one of the most influential and respected Jurists of our time began her career, but also to see the genesis of this area of law at a time when narrowly conscripted roles of women and men went from being taken for granted to being questioned for the first time in any real way in society, but what is most interesting is just how vital the unquestionably persuasive power of this young female attorney was in changing minds in real time on the opinions of the supreme court justices she argued in front of.

(Side note: the single dissent in this ruling came from Justice Rehnquist.)