“I did not begin when I was born, nor when I was conceived. I have been growing, developing, through incalculable myriads of millenniums. All my previous selves have their voices, echoes, promptings in me. Oh, incalculable times again shall I be born.” —Jack London; The Star Rover

I was not always called Serene, although it is my legal name. For the first five years of my life I was Tami. This is the name I first heard myself called; it is the name I first learned to write. My parents had both boy and girl names chosen for me, like most parents in those near-medieval times before ultrasound’s obtrusive peering into the womb became commonplace. If I was a boy, I was to have been named Wendell Burton Sargent, after Wendell Cory and Richard Burton. (And with a name like that I suspect I would have learned to fight at a very young age.) My mother had no interest in boy’s names, however, because, according to her, she always knew that I was going to be a girl. As a young child she sat in a clearing in the woods, and somehow or another just “knew” that she would have a daughter one day. A daughter named Serene. There were no voices. No divine vision. Just a knowing.

Thirty-five years and six miscarriages later, she was pregnant with me, and Dad, of course, already had a name picked out for a girl, as well. It was the name of his rock ‘n’ roll film: The TAMI Show .

I was to be Tami, but he was perfectly fine with Serene as a middle name.

This they agreed upon.

But it was only my mother in the hospital room when the lady from Vital Statistics came in with the paper to take down my shiny new name, and so Mother furthered the fate she had secretly seen, and wrote Serene Tami instead of Tami Serene on the official document, sealing her vision, along with my name, into official governmental solidity.

When Dad made his way back to the room she innocently told him that at the very last minute she had simply decided she liked the initials STS better than TSS; but they would still call me Tami.

Dad said that he’d thought the initials T.S. – tough shit – complimented his – B.S. – quite well, but Mother feigned offense, and that was that. As long as I was called Tami, what did it matter what was on the birth certificate? Mother reminded him that he was “Bill” to everyone who knew him, and not Horace William, as his birth certificate proclaimed. And Dad was satisfied.

A Tami with a Serene tucked carefully just below the surface. Hiding. Waiting to come out. 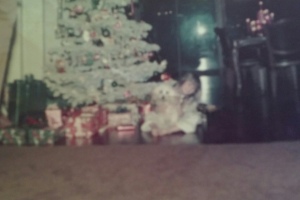 My Mother Named Me an Adjective; Part II

(+ I Have a Soul and Some Notebooks)