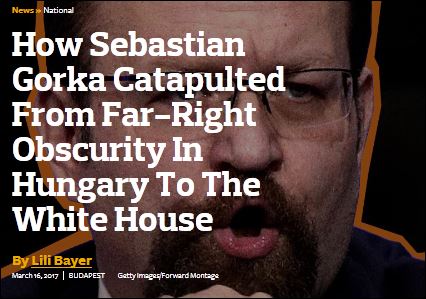 We need brute force to keep our drones. We certainly cannot lose them to the enemy. For our drones we need Germany.

We are not leaving Germany to chance.

Oh, say, you know who’s good at that?

Yesterday’s forward.com article written by Lili Bayer was featured on today’s Democracy Now! and Forward reporter Larry Cohler-Esses made a surprisingly devastating case that Sebastian Gorka, Trump’s “chief counter-terrorism consultant,” is a pledged member of the Hungary -based, Nazi Vitézi Rend group founded in World War II. (Gorka is a Hungarian national who only received US citizenship five years ago.)

And I’m saying it makes sense from the military perspective. In the cold, dead, Machiavelli mindset it makes perfect sense to pack Nazis into every government crack you can find. Through the lens of this murderous, greedy, necrophiliac Pentagon pestilence America has nourished for a century, it makes perfect sense.

In fact, from the perspective of the Pentagon’s Rumsfeld/Cheney “burrowed” warmongering staff,* not having Nazis would be the nonsensical choice.

These guys are playing the long game and we have been letting them by following their shiny Strawmen, of whom Trump is, in many ways, just the worst of the lot in a long line of anger-deflecting, useful idiots in our puppet regime.

And the Masters of War know how weak he is; they wanted him weak. And they know that he won’t last, and they don’t want him to. They’re almost done, anyway. So while we’re watching 24-hour cable news with ads from Boeing – because God knows Jake Tapper fans are huge Boeing customers – another group of our official mouthpieces whose paychecks are paid by their advertisers, like Boeing and Walmart and MasterCard and KFC, whose interests lie in anything but an informed public and whose business plans are based on ratings, where the only thing that tops controversy is war, they are busy putting the final touches on their final scene.

They are dotting the I’s and crossing the T’s on the There’s No Going Back Now plan.

We are already at war. We have been at war.  For a long damn time, now.

News is almost extinct, civil rights are nonexistent, censorship is being battened down with furious rapidity and almost no mention, and after that, it’s

So from their point of view, Trump’s complete idiocy is an asset.

Nobody is minding the store. Not that a president has had much power to “mind the store” in a long while, but still, politicians are a pesky bunch and as the future, in their minds, is a fait accompli – because it doesn’t take a West Point grad to see that bombing the same motherfuckers you’re arming is

not a good idea, and that sooner or later the term “nuclear option” takes on a more literal meaning.

And since arming the people we’re bombing has been official military policy for so long we don’t even notice it, what’s the play?

(There is one. A simple one. But we’re in these assholes’ addled brains at the moment, and yes, those probably are worms you’re feeling crawling all over you, so we won’t stay long.)

Now, based on everything these assholes have done and are doing, based on only the facts that no one argues over, and from their perspective:

what is their play?

Any eighteen year old Army Private is well versed in “first-order effects” and “second-order effects.” This is not rocket science.

So Trump and his band of loyal Nazis is their answer.

Trump has given us a target and aroused passion. And Lord God Almiiiiitey, did we ever need that!

Still, there are those of us who still must keep our eye on the War Machine ball speeding along at breakneck pace. Some who know that changing Trump for Pence or Clinton or whatever other Scarecrow they stick in front of us changes the font and leaves the equation intact.

This is not an insect bite. This is in the bloodstream. In the marrow. In the soil, the seeds, the water, the industry, the food, churches, schools, clothes, air, and the fucking small town fire departments, for god’s sake. So it’s pretty important that those who actually can grasp that, do.

and so did any pretense of war.

The groundwork was laid. No more rehearsals.

And it does not take a wealth of world history to illustrate this.

Two big dots on the horizon, please and thank you.

Both of these are symbiotic. And everything before and since, a million moving pieces only point one way. Detail folds in upon detail to form an HD mosaic. There is no puzzle once one looks. There are no deductions needed. But the world is vast and deep and we are flooded with input, so that even those who spend a lifetime studying cannot take it all in, let alone even know what information is needs to be taken in.

We see fragmented sections, and if that is not by design, it must entail one extraordinary flood of coincidences.

Humanity is the death of war.

I am stating both those very evidence-packed conclusions as fact without putting forward even a hint of supporting testimony – something I am not given to doing – because I believe the prima facie facts involved are so strong as to be presumptively stipulated to.

But, on the off chance, like, the way, way off-chance that there is any man or machine in existence that will both read this and believe there is some opposing fact that calls the into question a presumptive stipulation,, even if improbably,  I will retract it as fact, add your thoughts and support for claim(s) questioned.

Maybe it is just that the military, not usually a fly-by-the-seat-of-their-pants type organization, has moved in such an exponentially aggressive compartmentalization that soldiers themselves are terrified by it, wholly by happy accident.

we are so at fucking war. Until recently no one has even mentioned the Navy, and even now the only focus is on fucking China.

Unless I’m forgetting some famous New York Times or WaPo reporters on the US Navy beat. And no, Trump’s little soiree on the Gerald Ford the other day does not count.

(Okay, not digressing into a 5th Fleet rant.)

Germany is in serious play. Germany is not optional for the US militarily.

Germany is the keys to the kingdom.

The drones are certainly not all that Germany means. NATO is rather obvious, but for practical, Socratic reasoning let us remove the abstraction altogether for now.

We don’t need chess, here. This is Tic-Tac-Toe.

We need brute force to keep our drones. We certainly cannot lose them to the enemy. For our drones we need Germany.

We are not leaving Germany to chance.

Oh, say, you know who’s good at that?

*At the end of W’s administration there were tons of articles on the marked degree of staff-stuffing that was going on. The practice is known as burrowing.

AGAPE COVID-19 Entertainment for Armageddon Epidemics Feed Your Head Fight Like a Girl how we play chess I AM THE WALRUS love make the world glass Matriarchy my damn daddy Plagues SCOTUS Shiva Sisters are Saviors Swamp Creatures tear down the wall trump Unmasking War, arms trade, and all that nasty shit We are AWAKE Русский

AGAPE apropos of nothing Aquarius batmish Black Lives Matter COVID-19 Entertainment for Armageddon Epidemics Feed Your Head Fight Like a Girl how we play chess I AM THE WALRUS love make the world glass Matriarchy my damn daddy Plagues SCOTUS Shiva Sisters are Saviors Swamp Creatures TAMI tear down the wall The TAMI Show trump Uncategorized Unmasking War, arms trade, and all that nasty shit We are AWAKE Русский
Follow serene on WordPress.com
%d bloggers like this: