A little more content in remembrance of Dad on his birthday. 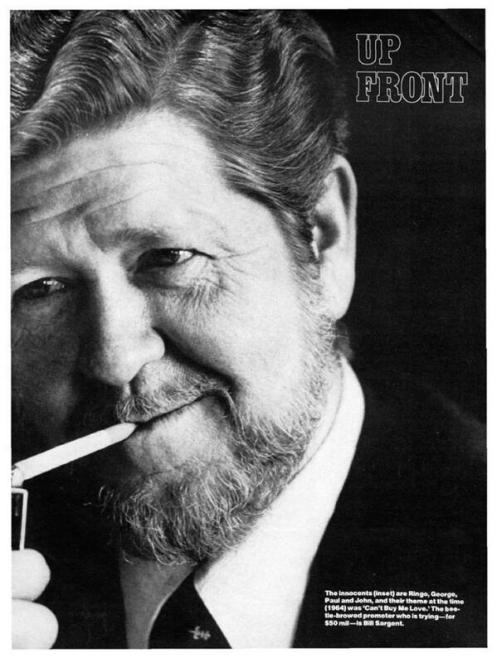 Start of article: Cover Story
*I made a couple of small notes/corrections at the end of the article*

So, here’s the article:

He puffs Kools instead of stogies…

… but in every other flamboyant excess, Bill Sargent is the Don King of the showbiz hill. So it figures that a Beatles’ reunion has been a bubble on his Barnumesque brain almost from the acrimonious day in 1970 when they first went asunder. If the Beatles were again to come together—especially with today’s breakthroughs in satellite-fed transmission for closed-circuit—promoter Sargent could be back into the seven figures. By his own account, Bill has, at 48, made and blown a million on seven different occasions. He has also accrued two heart attacks.

As of now, the Beatles seem more likely to provide Sargent with Coronary No. 3 than Fortune No. 8. Which perhaps says more about their lawyers than their current prestige. The Liverpool Four have not only altered the drift of popular culture for their contemporaries—the boys are now approaching their middle 30s—but have also turned on a younger generation that digs them only by hearsay. Marvels McCartney: “When these kids come up to me for my autograph, I feel like their Uncle Paul.”

None of this was lost on a shrewdie like Sargent, and his feel-out bid in 1974 was $10 million. This January the ante was sweetened to $30 million, and in February to $50 mil.

… The son of an Oklahoma oilman, Bill shined shoes at 9, specialized in electronics in the Navy and numerous colleges (none of which he graduated from) and patented a Pay-TV system back in 1959. His claimed credits include the first TV fight of Cassius Clay, Richard Burton’s Electronovision Hamlet of 1964 and last year’s filmed version of James Whitmore’s Truman reenactment, “Give ‘Em Hell, Harry.” Sargent also hyped some spectaculars that never happened, like an Elvis Presley dramatization of the life of Rudolph Valentino. Along the way Bill accumulated two wives, five kids and several homes. But he and his second wife, an ex-airlines stew, along with their young daughter now rent modestly in the lower Beverly Hills.

Bill’s shop, though, is an imposing suite in L.A.’s Century City, known facetiously as Kellogg Hill, because of its disproportionate population of flakes. But when the trade scoffs at Sargent, he snaps: “They have a beautiful record for being wrong here.” At the same time, he concedes defeat in bringing the Beatles together by his original target date of July 5, 1976. The obstacle, he says, is McCartney, who starts a 20-city U.S. tour next week and is not about to risk diminishing its box office by allowing announcement of the comeback of the Fab Four.

… It is true that the four of them have spun off in centrifugal directions, musically and philosophically (see pages 16-19). And a reunion might be as poignant as baseball Hall of Famers sloppily getting together for Old-Timers Day. But a top-level rock functionary reports: “I know for a fact that George, John and Ringo have talked among themselves about a reunion, and their attorneys say it is possible. But,” he adds, “they would rather go with someone less carnival-like than Sargent.”

Bill doesn’t buy that. “I’m a professional winner,” he crows. “Just about the time everybody counts me out, I bounce back.”

A couple of small notes: